The first of the month. An insignificant date. There’s the vague, slight and retrospective attraction of the obvious – namely, starting something on a ‘first day’ – but nothing more. I’ve long thought that “This Was The Day” might be a worthwhile project. It’s a Sunday, I had some spare time to make a start on it. It happens to be the first of the month. Pure, random coincidence.

A Sunday and some time with an old J Geils Band album, ‘Nightmares …’, for an aural backdrop. An old and now newly rediscovered favourite. It seems surprisingly fresh. I was looking along the shelves for something I’d not played for longer than I can remember. I noticed it. 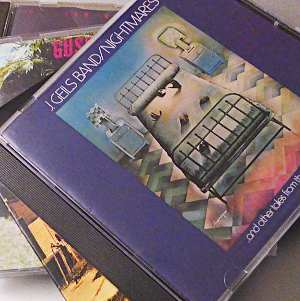 It was on the shelf next to Jan Garbarek (‘I Took Up The Runes’), Gussie (‘Presenting IRoy’) and The Gutter Twins (‘Saturnalia’). I was putting the Garbarek back. I picked on J Geils. I could have picked something else from the shelves that is similarly half-forgotten. It was random.

I tend to file things alphabetically but not overly strictly. Within each letter-group, it’s by artists I have just one product by, then artists I have two products by … and so on. Sometimes my overall filing logic is flimsy. Deep Purple is in the D section, but Pere Ubu in with the Us. I suspect it’s down to some kind of association on my part, but I’ve never tried to work it out. It makes sense to me and that’s enough.

As ‘Nightmares …’ played I was writing an email in reply to an old, old friend who’s only just recently found out he has a serious cancer in an advance state. The ‘Nightmares …’ title of the soundtrack to my typing may seem appropriate, if grim, but only with hindsight. It was an insignificant, random choice of album. The cancer is anything but insignificant. I don’t know if it’s random.

And as I write these notes, I realise today was the day I properly understood that no-one can make new old friends.